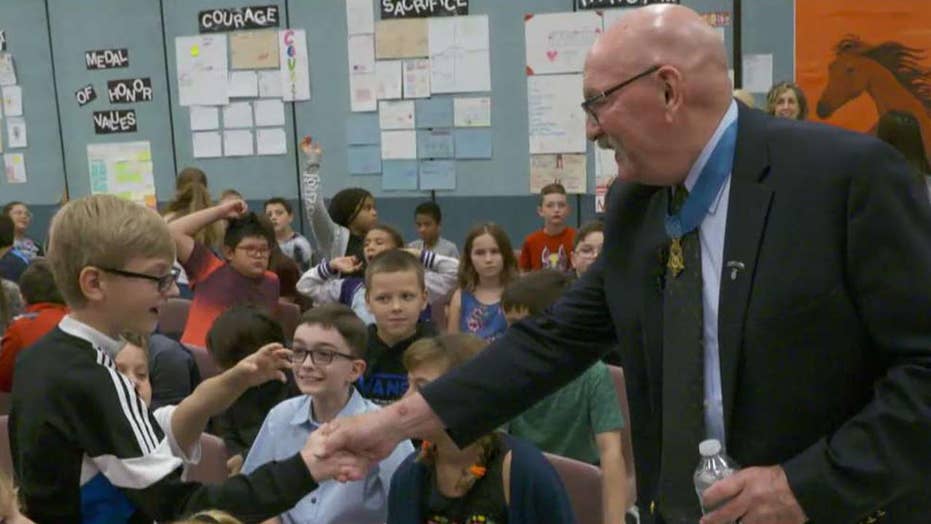 Medal of Honor program provides path for recipients to give back

SEFFNER, Fla. -- In the auditorium of Florida's Seffner Elementary, Medal of Honor recipient Gary Beikirch has the undivided attention of dozens of students.

"The Medal of Honor is about a different way to live your life," said Beikirch, a Vietnam veteran and former Green Beret. "We want you to truly live, and I want to encourage you to live your life thinking about other people."

Beikirch told his story through a 15-year-old boy, Deo, who befriended his military team in Vietnam, taught them how to survive in the jungle and then saved his life. Beikirch, whose wife, Lolly, often would sit on the stage with him while he spoke, said the teenager showed him that the only way to live your own life fully would be to put others first.

Beikirch is part of what’s called the Medal of Honor Character Development Program. Designed by educators, it launched for secondary students in 2009 in Pennsylvania. An elementary school program was added in 2016. The program has held teacher-training sessions in 45 states.

Visiting Florida's Beth Shields Middle School, Beikirch told a packed auditorium of students that it’s not about traditional success in life -- with money and cars and a fancy house -- but about leading a life of significance. "And, significance, I believe, happens when you make a difference in someone else's life," he said, "when somebody else's life has changed because you're there for them."

"There was one girl who hugged him five times and thanked him for his service," the school’s assistant principal, Miriam Duran, said. "That kind of thing, that makes it all worth it because that's the thing that teachers need to see, that these kids are aching to have their emotional needs filled. They're aching for adults that value them in that way."

Eighth-grader Marcus Way told Fox News: "It's nice to come and see this man because he's teaching us that you always solve things yourselves, and you need to have somebody else that you love and you know very well to help you with those problems."

The Medal of Honor is our nation's highest military honor. There are only 71 living recipients.

Beikirch received the nation's highest military honor for treating the injured despite a spinal injury and bullet wounds. Although his citation read, "For conspicuous gallantry and intrepidity in action at the risk of his life above and beyond the call of duty," Beikirch credited Deo.

"After I got shot and I landed on the ground, the next thing I felt was somebody picking me up, and that was Deo," Beikirch told students. "I couldn't walk, but Deo carried me through the battle."

Beikirch said: "He rolled me over, laid on top of me. The rocket exploded, we flew up in the air, landed, and I said, ‘OK, come on, let's go,’ and Deo was laying on top of me but he didn't move this time. I shook him a little bit. I said, ‘c’mon Deo, c’mon.’ And, the other mountaineer that was with us said, ‘he’s dead.’ Deo was killed. So, we kept on fighting. That commitment we had for each other was what made us do what we needed to do."

After the assembly, Beikirch opened up about coming to terms with Deo's loss, which would not have been possible without Lolly's support and understanding.

"The thing is that for years that was hidden because of all the guilt and the anger, and all those things that I thought the best way to deal with them is to hide them. But, they were just doors that kept me from experiencing those good things," he said. "I had to open those up and learn how to live. I was just surviving. I remember, 'No, you got to live,' so I had to work through that anger and that I can have those memories of what they already taught me."

Beikirch seemed to speak for many recipients when he said they're custodians or keepers of the medal, because the honor belongs to the nation and every individual wearing the uniform.

Click here to learn more about the Medal of Honor Character Development program.