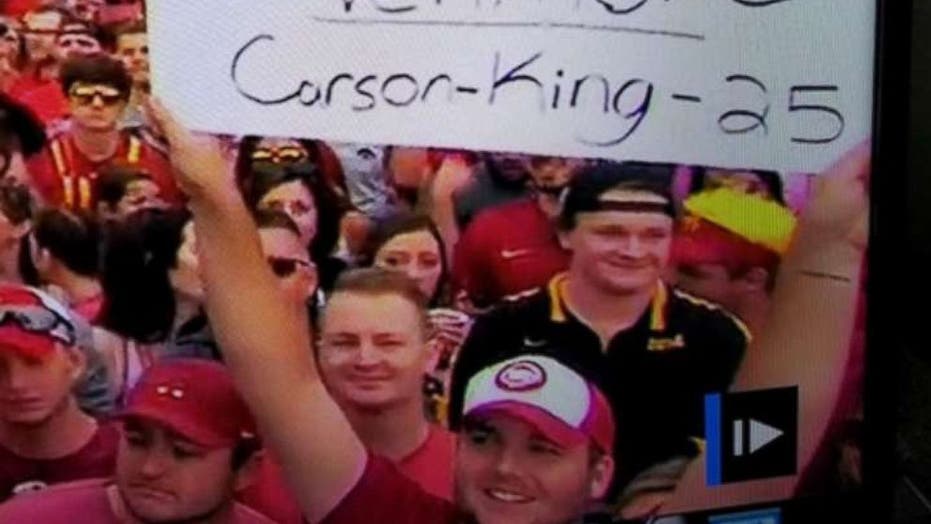 Foregoing any spooky costumes this year, one boy in Iowa decided to dress up for Halloween as Carson King, the football fan whose beer money sign went viral and ended up raising over $3 million for charity.

“Sam decided what he wanted to be for Halloween about a month ago and has not wavered a bit!” his mother posted to Facebook. “His uncle talked me into opening a Venmo account so he can donate money to the U of I Children's Hospital. Just like Carson.”

Sam’s mother, Cindy Sobaski Hall, posted an update that as of Saturday, Sam had raised $8,000.

ARKANSAS WOMAN TEXTED FATHER'S NUMBER EVERY DAY AFTER HE DIED, SHE GOT A RESPONSE FOUR YEARS LATER

In a hopeful joke of raising money to drink, Iowa resident Carson King held a sign up in the background of ESPN’s “College Gameday” asking viewers to send him beer money.

"I just thought as a joke, maybe I could make a sign asking for money to get some Busch Light. You know, buy some lattes," King told Fox4KC.  "My mom was like 'this is going to be a proud mom moment. My son is going to be begging for money for beer on national television.'"

He ended up raising over $3 million, which he donated to a local children’s hospital. Busch Beer committed to matching all of the donations King received.

Soon after, the Des Moines Register uncovered tweets from King in 2012, then 16, which included racist jokes. Anheuser-Busch promptly cut ties with King.

“Carson King had multiple social media posts that do not align with our values as a brand or as a company and we will have no further association with him. We are honoring our commitment by donating more than $350,000 to the University of Iowa Hospitals and Clinics,” a spokesperson for Anheuser-Busch said in a statement.

King posted a message to Twitter explaining and apologizing for the tweets. He said that in social media posts, he and some friends quoted and referenced the TV show Tosh.0. “I see it was an attempt at humor that was offensive and hurtful.”

The reporter who uncovered the tweets was fired by the Register after backlash for exposing King.