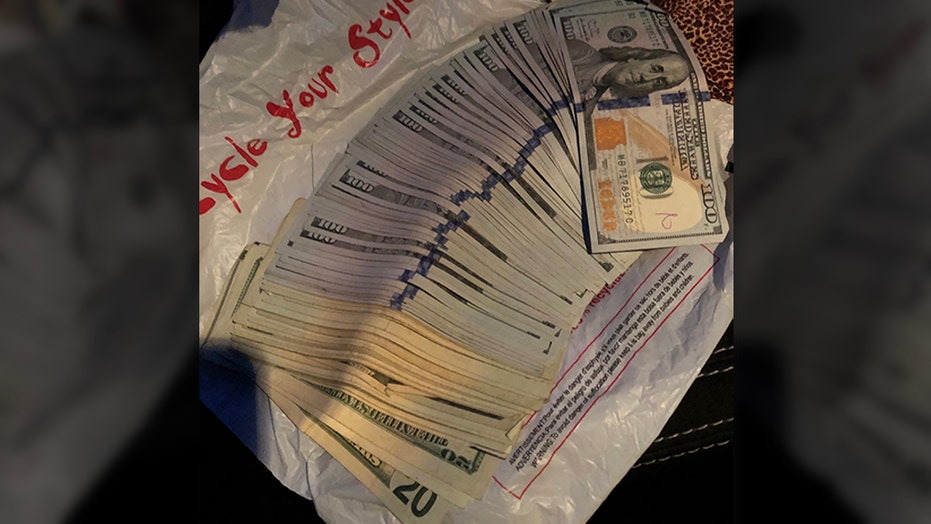 A $7,000 stack of cash is back in the hands of its rightful owner after an employee at an Indiana resale shop found it in a coat pocket -- and decided to return it.

For the past two years, Jennifer Kimes has been a buyer at Plato’s Closet Valparaiso, about an hour from Chicago. She told Fox News that about two weeks ago she was going through her normal routine inspecting clothes when she found the cash inside a coat that a man had dropped off.

“When I put my hand in the pocket, I felt something. When I pulled the money out, it made me panic a little bit, So, I put it back in the pocket for a second and then I took it back out of the pocket and ran over and put it in the register, and immediately called the owner of the store,” Kimes told Fox News.

SISTERS REUNITED AFTER 75 YEARS THANKS TO ONLINE DNA TEST

She said she’d never found that much cash before.

Kimes said she instinctively knew she wanted to return the money to the rightful owner.

“I was shocked. I am just really glad we thoroughly check everything.”

Kimes called her boss, Tammy Wendland, the owner of the store.

“I just knew that we needed to take great care of it so we can properly give it back to the owner,” Wendland told Fox News.

Wendland said the next day, she returned the cash to the coat’s previous owner -- who also owned a store nearby.

“I was really grateful and glad that when I walked into his store that he already had understood and knew what it was without me telling him what it was,” Wendland said.

“He indicated to me, ‘I know what you have,’ and I said to him, ‘What do I have?’ And, in response, he told me that I have a very large sum of money with a rubber band around it, and I told him that I was really grateful that he knew what I had because it absolutely put my mind at ease that it was going to the right person.”

Wendland said he told her he had stowed the money in the coat pocket for safekeeping -- but later forgot that he’d placed it there.

Kimes said she was very happy the money was back in the hands of the rightful owner. “I can’t imagine losing that much money,” she said.

“We were just glad to do the right thing,” Wendland told Fox News.

She also praised Kimes: “I am grateful that she is always what I thought she was, what I expected her to be, that she has very high integrity.”