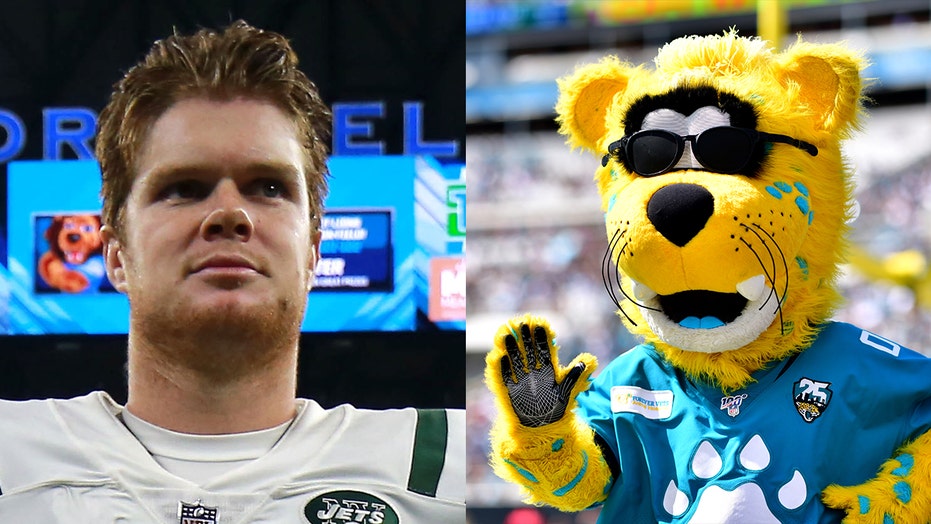 With Halloween right around the corner, the mascot for the Jacksonville Jaguars, Jaxson de Ville, unveiled a new costume aimed at trolling New York Jets quarterback Sam Darnold during Sunday's game in Florida.

Sam Darnold committed a career-high five turnovers against the New England Patriots this past Monday and was picked up by a mic exclaiming he was "seeing ghosts."

"Seeing ghosts is, 'I thought the guy was blitzing, I saw the safety back up into deep coverage,' and then you watch the film and that's not the case," Favre said. "It's really nothing other than being a young player, being exposed to a lot of stuff, and really not so much thrown to the wolves, I don't think [Jets head coach] Adam Gase did anything wrong."

On Sunday afternoon in Jacksonville, the Jaguars were fully aware of his comment, as Jaxson de Ville put on a white sheet and dressed up as a ghost - poking a little fun at the expense of Darnold.

He was seen running out of the tunnel and preparing to do his signature bungee jump from the top of the stadium onto the field - while dressed in the costume - before the kickoff.

But, that was just the tip of the iceberg.

Jaguars' defensive players also planned to yell "Boo" to Darnold during the spooky affair on Sunday, according to a report by ESPN.

A plane was spotted flying over the stadium with a banner claiming Jaguars quarterback Gardner Minshew "ain't afraid of no ghosts," a reference to the 1984 comedy film "Ghostbusters."

One fan even recorded the team playing the "Ghostbusters" theme song while showing a montage of bad plays from Darnold.

Darnold has insisted the "seeing ghosts" comments that were picked up won't bother him and he's moving on from last week's 33-0 shutout.loss.

"I was able to get over it on my own," Darnold said. "When I started watching Jacksonville film, I was over it. That's how I have to look at things, and that's what I did."

Darnold completed 21-30 passes for 218 yards during the Jets 29-15 loss against the Jaguars on Sunday. He threw for two touchdowns but also had three costly interceptions. He was sacked eight times.

Minshew, the sixth-round draft pick, completed 22-34 passes for 279 yards and three touchdowns. The Jets fell to 1-6.

After a 0-2 start to the season and losing their starting quarterback, Nick Foles, to injury in the first quarter of their opening game of the season, the Jaguars have clawed back to a 4-4 record and are set to head to London next Sunday for a showdown against the Houston Texans.

The legend of Minshew Mania continued and it appears he "ain't afraid of no ghosts."