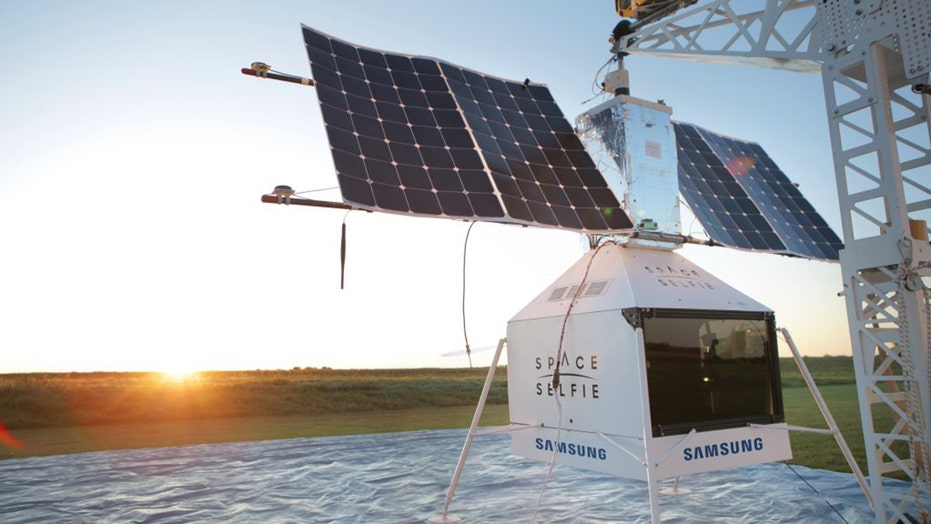 A Samsung pseudo space satellite crash-landed Saturday on a family farm in Merrill, Mich., according to local reports.

Nancy Welke said she heard a loud crash around 8:45 a.m. before she and her husband Dan were set to let their horses out, according to a Facebook post by the Gratiot County Herald.

When she went outside, Welke said she found a four-legged object with solar panels attached to the top of it. The outlet reported the object was still humming and landed on Welke's property with a safety parachute.

NASA CHIEF SAYS 'PLUTO SHOULD BE A PLANET'

"Unbelievable. Look what just fell out of the sky and 911 is baffled and it's caught up in our tree," Welke posted.

According to Gratiot County Central Dispatch officials, the fire department closed the roadway for 30 minutes due to a large balloon associated with the launch being caught in live power lines, causing outages.

The officials warned drivers to stay clear of the area.

The Samsung SpaceSelfie was designed to allow consumers a chance to get their pictures in the stratosphere via a Galaxy S10 5G smartphone launched into space, according to an article from Samsung Newsroom U.K. The phone would receive photos transmitted from the planet and layer them over real-time shots above the Earth.

"To celebrate that amazing things happen on Samsung screens we decided to take selfies to a new level and give people a chance to get their face in space," Samsung Europe Chief Marketing Officer Benjamin Braun said. "We are constantly pushing the boundaries of what is possible and with SpaceSelfie, we will show that amazing things continue to happen using Samsung technology – even from the edge of space."

The article added, "With over 200 hours at 65,000 feet above the earth, the S10 5G will showcase the strength of Samsung’s innovations and how it continues to design products that make what was previously impossible, possible."

An email statement from Samsung said the landing was planned and no injuries occurred when the "Samsung Europe's SpaceSelfie balloon" landed.

"Earlier today, Samsung Europe's SpaceSelfie balloon came back down to earth. During this planned descent of the balloon to land in the U.S., weather conditions resulted in an early soft landing in a selected rural area," the statement read, according to USA Today. "We regret any inconvenience this may have caused."

After the crash landing, Welke expressed in the Facebook video that in life, anything can happen.

"Thank God there were no horses out," she said.