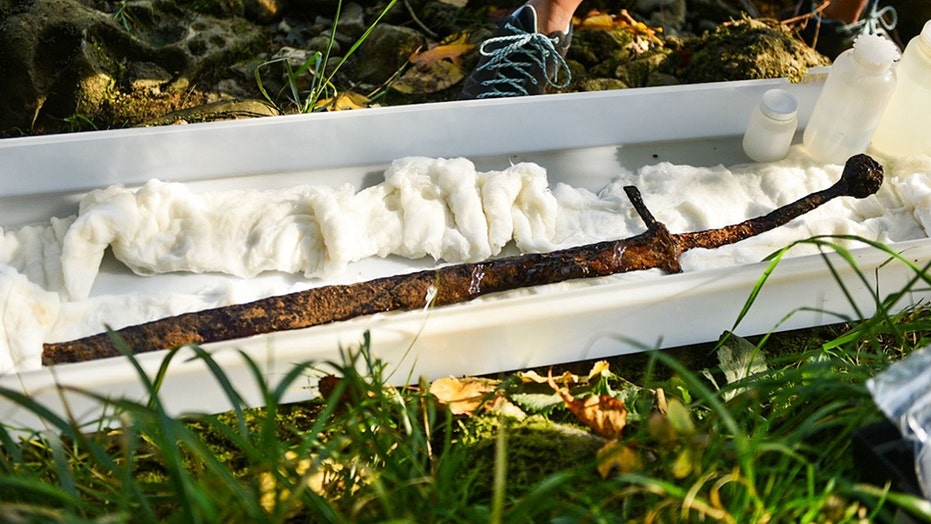 Legend has it that King Arthur was the only person able to pull Excalibur from a stone. But a newly discovered blade found stuck in a rock in a Bosnian river is being described as a "real-life Excalibur."

The 700-year-old sword, discovered in the Vrbas River, was found 36 feet underwater, stuck in a rock while archaeologists were excavating a nearby castle, The Sun reports. The Vrbas is a 150-mile long river in the heart of Bosnia, right near the city of Banja Luka.

Archaeologist and curator at the Museum of the Republika Srpska, Ivana Pandzic, said the sword was stuck in "a solid rock, so special care was needed when pulling it out" in comments obtained by The Sun.

The sword after being pulled out of the river. (Credit: Central European News)

Igor Radojicic, the mayor of nearby Banja Luja, the second-largest city in Bosnia, tweeted about the remarkable find.

"Our sword in stone ... taken out of Vrbas after who knows how many centuries," Radojicic wrote in a translated tweet.

In a subsequent tweet, Radojicic wrote that the Banja Luka stone sword is perhaps "eight centuries-old" and "who knows what stories [it is] hiding."

Researchers are now trying to figure out how the sword became embedded in the rock.

In 2017, a British girl swimming at Dozmary Pool, the lake in the King Arthur legend, happened upon a shiny, 4-foot sword, which is thought to be a movie prop.

Earlier this year, workers digging a sewer in the Danish city of Aalborg came across a remarkably well-preserved sword that dates back to at least the 14th century. In 2017, an incredibly well-preserved Viking sword was found by a reindeer hunter on a remote mountain in Southern Norway.