Glut of luxury condos across US leads to ghost towers: 'Prices need to drop'

MIAMI –– Major cities across the United States saw a large number of luxury condos transform their skyline the past five years -- units that boasted glitzy waterfronts and sparkling city views, with a hefty price tag. But now, cities are seeing ghost towers. And thousands of unsold units are clogging up the real-estate market.

“Many developers over-calculated what they could sell," said Katrina Campins, a luxury real estate specialist in Miami. "You're experiencing that in various different markets. One market is South Florida, where you have an oversupply."

Large cities across the U.S., including Los Angeles and New York City, also saw a big boom in condo developments during the past five years, only to see many remain empty. Economists say a fourth of more than 16,000 new condos built in the Big Apple over the last six years remain unsold. 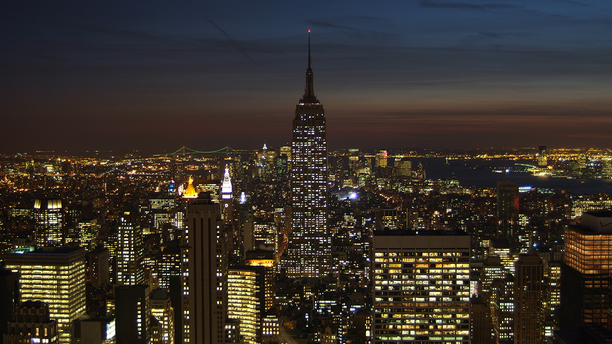 For consumers, the condo glut means more options to choose from, and less urgency to buy. Adding to the problem for sellers are high prices and fees, less owned land and less buying power from overseas. (AP)

“The New York City real estate market is struggling to absorb the wave of luxury condos built in the city since the recovery from the financial crisis," said Grant Long, an economist with real-estate data company StreetEasy. "New York’s status as a global city and the allure of owning trophy properties has led to a number of high profile deals, yet demand among the global rich has not been as deep as many developers had hoped."

Softening economies in Latin America and China have dealt a huge blow to luxury real estate markets across the country. Experts say a glut of high-end condos has also oversaturated the market, leading to a growing number of ghost towers.

"We don't have the demand from Latin America, which has definitely affected the market," Campins said. "A lot of sellers are forced to become realistic and many times they're selling it for less than what they paid for."

LUXURY BUILDINGS BRING ELEVATOR PRIVACY TO THE NEXT LEVEL 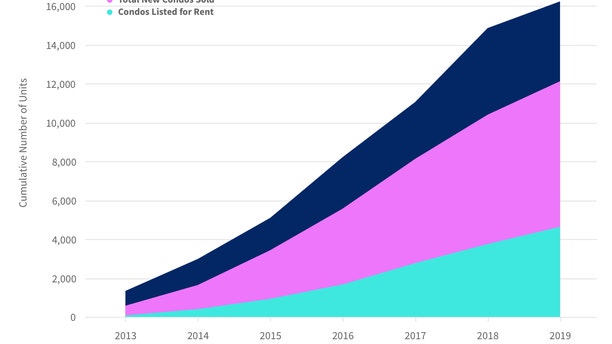 According to data Fox News compiled from real-estate data companies Zillow, StreetEasy and Luxury Homes Los Angeles, condo sales have seen a steep decline over the last several years. Looking at the months January through September, in Miami, 1,260 units sold in 2016. This year, just 654 units sold, representing a 48 percent sales decrease. In New York, in 2016 there were 2,141 units sold. This year, only 1,724 units were sold, showing an almost 20 percent drop in sales. 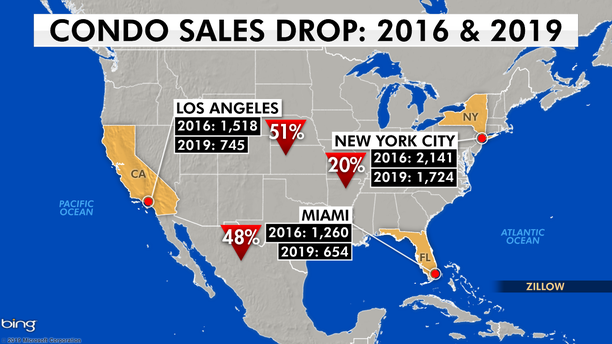 Peter Zalewski, the principal of real estate consulting group Condo Vultures, said the supply of luxury condos available for sale has more than doubled since 2011.

“The limited amount of luxury condos available for sale at that time is what triggered the building boom in South Florida,” Zalewski said. “That has resulted in today's oversupplied market.”

Miami developer Henry Torres agrees the market is seeing an oversaturation -- but he believes the demand will eventually catch up to the supply.

RESIDENTIAL LIVING WITH HOTEL PERKS: HOW THE ULTRA-RICH LIVE

“It is becoming a different type of market. It's not the Florida of 50 years ago,” Torres said.

Torres said he spent more than $100 million on his latest condo development, Merrick Manor, in Coral Gables, an affluent Miami suburb. He hopes the market will pick up speed, but for now, he is renting out units. 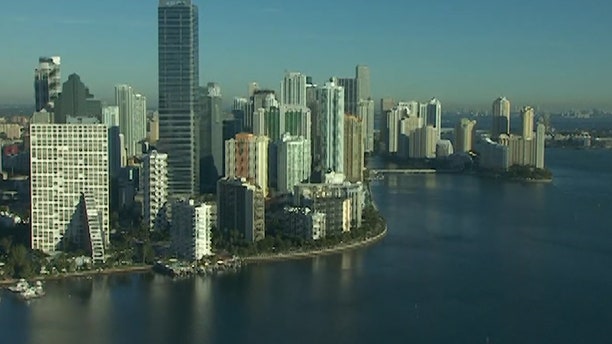 Los Angeles and New York City have also seen a big boom in condo developments over the last half decade, but economists say a fourth of over 16,000 new condos built in the Big Apple over the last six years remain unsold.  (Elina Shirazi)

Tony Mariotti, the owner and realtor of Luxury Homes Los Angeles, said the slowdown in the luxury condo market could be a sign that potential buyers are uneasy about the economy. He said luxury buyers tend to be well-informed and are anticipating risks in the market.

“Weak corporate earnings and rising risks of a recession can have a chilling effect on one's appetite to speculate on real estate,” Mariotti said.

According to Mariotti, sales have been flat among luxury condos, or those valued $3 million and above. Eight units sold in the L.A. market in September 2019, compared to seven in the same month in 2015. However, the inventory this year is nearly threefold: 144 units were on the market compared to 54 at the same time in 2015.

In New York City, 63 condo buildings with more than 5,600 units are listed on StreetEasy. Long said construction is still far outpacing sales; for every three condos completed in 2018, only two built since the beginning of 2013 have sold. Agents say even more are in the pipeline. 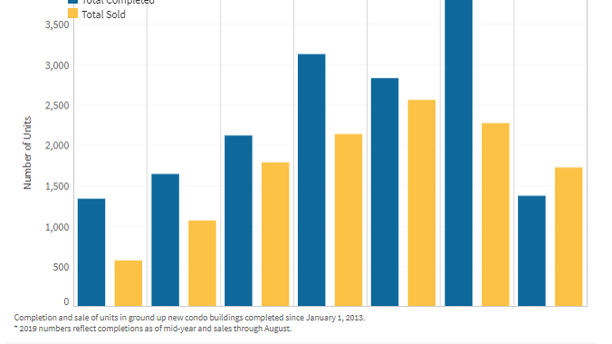 “Similar dynamics in other cities around the world are demonstrating the extent to which real estate can fluctuate like a luxury good, untethered to the laws of supply and demand,” Long said.

Agents say one thing is certain: For units to be sold in this competitive market, prices must be lower. That means negotiating power is in the hands of buyers, and now could be a good time to buy.

“With investors saturating the market, and more units on the way, New Yorkers can expect this condo hangover to last well into the future," Long said. "Prices need to fall enough for residents.”

Elina Shirazi joined Fox News in 2018 as a multimedia reporter based in Miami.

This material may not be published, broadcast, rewritten, or redistributed. © FOX News Network, LLC. All rights reserved. All market data delayed 20 minutes. Updated Privacy - Do Not Sell my Personal Information - New Terms of Use - FAQ