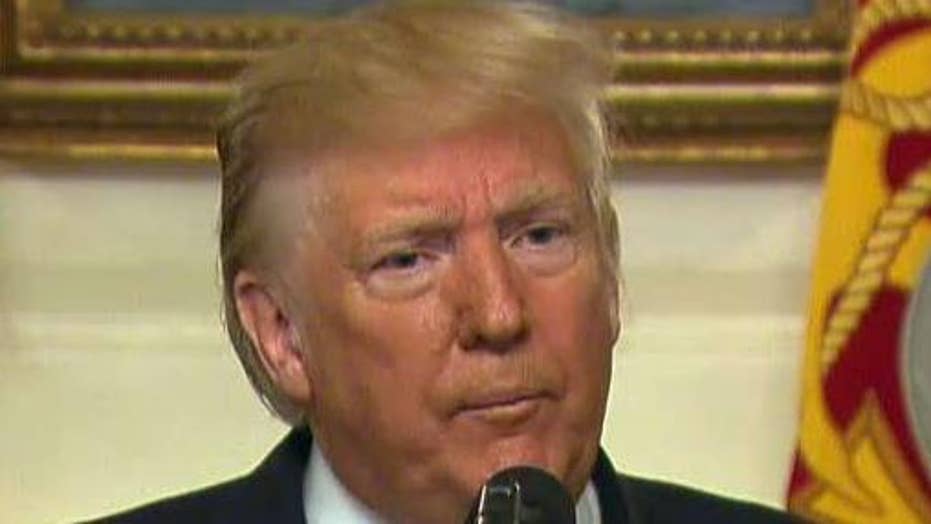 President Trump said Sunday morning that he did not tell House Speaker Nancy Pelosi about the U.S. military raid in Syria that resulted in the death of ISIS leader Abu Bakr al-Baghdadi because he was worried about leaks that could have compromised the mission.

Vice President Mike Pence said this was not an indication of a lack of trust.

When asked if he notified Pelosi beforehand, Trump said he did not because he did not want any members of the U.S. forces to die.

“No, I didn’t. I didn’t do that. I wanted to make sure this kept secret,” Trump said. “I don’t want to have people lost.”

Pelosi issued a statement after al-Baghdadi's death was announced, criticizing Trump for not informing leaders in Congress beforehand.

"The House must be briefed on this raid, which the Russians but not top Congressional Leadership were notified of in advance, and on the Administration’s overall strategy in the region," Pelosi said. "Our military and allies deserve strong, smart and strategic leadership from Washington."

Trump said that he did notify Russia beforehand that the U.S. would be active in the region, because Russia currently has a presence there. The president said he did not reveal the purpose of the mission.

Pence downplayed Trump’s decision to keep Pelosi in the dark in an appearance on “Fox News Sunday" immediately following Trump’s address. The vice president claimed that Trump did not mean to say he did not trust the House Speaker.

“I don’t think that was the implication at all,” Pence said. When pressed on the issue, the vice president said, “We maintain the tightest possible security here,” and focused on Trump’s goal, which was to bring al-Baghdadi to justice.

Before fielding the question about Pelosi, Trump had said that the only ones who knew about the operation beforehand “were the few people I dealt with.” He mentioned Pence, Secretary of State Mike Pompeo, National Security Adviser Robert O’Brien, and Chairman of the Joint Chiefs of Staff Gen. Mark Milley as some of those with whom he worked.

Congressional sources from the Republican side told Fox News they were notified about the raid Saturday night, but it was unclear if this was before or after it took place.

Trump said he spoke about the operation with certain individuals like Sens. Richard Burr, R-N.C., and Lindsey Graham, R-S.C., Sunday morning, but that he did not tell any of them beforehand.

“We’ve notified some, others are being notified now as I speak,” Trump said. “We were going to notify them last night but we decided not to do that because Washington leaks like I’ve never seen before.”

The president went on to call Washington, D.C. “a leaking machine, and said he decided “we will not notify them until our great people are out,” because “I don’t want to have them greeted with firepower like you wouldn’t believe.”

Trump touted the success of the operation, and how no members of the U.S. forces were killed, with just one military dog injured.