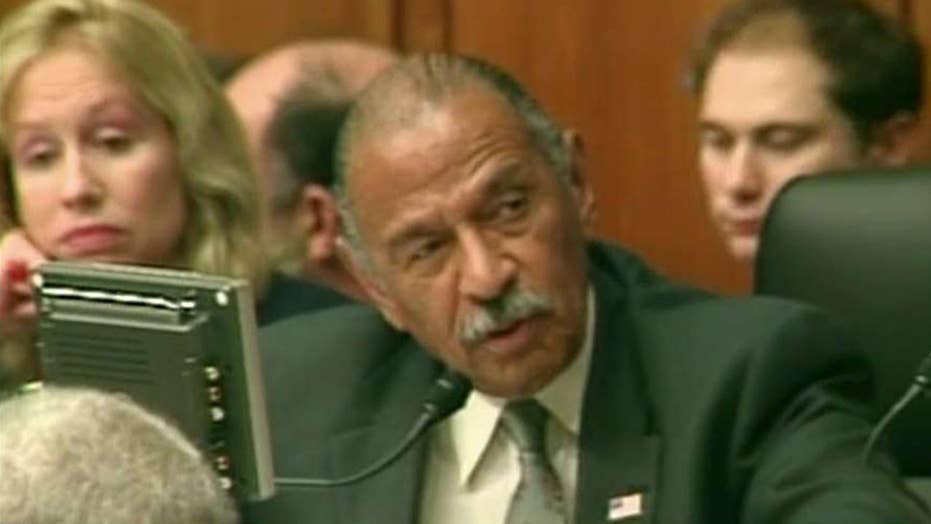 Detroit police say the former congressman died of what appears to be natural causes at his home on Sunday.

Former Michigan Rep. John Conyers, the longest-serving black member of Congress and founder of the Congressional Black Caucus who resigned in 2017 amid sexual harassment allegations, has died in his sleep, Fox News confirmed.

Detroit police said the 90-year-old former congressman, a Democrat, died at his home on Sunday, apparently of natural causes.

Conyers became one of only six black House members when he was won his first election by just 108 votes in 1964. The race was the beginning of more than 50 years of election dominance: Conyers regularly won elections with more than 80 percent of the vote, even after his wife went to prison for taking a bribe.

He served for years as chair and ranking Democrat of the House Judiciary Committee.

But after a nearly 53-year career, he became the first Capitol Hill politician to lose his job in the torrent of sexual misconduct allegations sweeping through the nation's workplaces. A former staffer alleged she was fired because she rejected his sexual advances, and others said they'd witnessed Conyers inappropriately touching female staffers or requesting sexual favors.

Conyers denied the allegations but eventually stepped down, citing health reasons, saying his legacy couldn't be diminished after 53 years in office.

He unsuccessfully sought to have his son take his seat in 2017.

"My legacy can't be compromised or diminished in any way by what we're going through now," Conyers told a Detroit radio station from a hospital where he'd been taken after complaining of lightheadedness in December 2017. "This, too, shall pass. My legacy will continue through my children."

Throughout his career, Conyers used his influence to push civil rights. After a 15-year fight, he won passage of legislation declaring the Rev. Martin Luther King Jr.'s birthday a national holiday, first celebrated in 1986. He regularly introduced a bill starting in 1989 to study the harm caused by slavery and the possibility of reparations for slaves' descendants. That bill never got past a House subcommittee.

His district office in Detroit employed civil rights legend Rosa Parks from 1965 until her retirement in 1988. In 2005, Conyers was among 11 people inducted to the International Civil Rights Walk of Fame.

Conyers was born and grew up in Detroit, where his father, John Conyers Sr., was a union organizer in the automotive industry and an international representative with the United Auto Workers union. He insisted that his son, a jazz aficionado from an early age, not become a musician.

The younger Conyers heeded the advice, but jazz remained, he said, one of his "great pleasures." He sponsored legislation to forgive the $1.6 million tax debt of band leader Woody Herman's estate and once kept a standup bass in his Washington office.

Before heading to Washington, Conyers served in the National Guard and with the U.S. Army Corps of Engineers during the Korean War supervising repairs of military aircraft. He earned his bachelor's and law degrees from Wayne State University in the late 1950s.

His political aspirations were honed while working as a legislative assistant from 1958 to 1961 to U.S. Rep. John Dingell, a fellow Michigan Democrat who, when he retired in 2014 at age 88, was Congress' longest-serving member. That mantle then was passed onto Conyers.

Soon after being elected to Congress, Conyers' leadership at home — in the segregated streets of Detroit — would be tested. Parts of the city were burned during riots in July 1967 that were sparked by hostilities between black residents and Detroit's mostly white police force, and by the cramped living conditions in black neighborhoods.

FILE - In an April 11, 2016 file photo, Congressman John Conyers is seen during a ceremony for former U.S. Sen. Carl Levin, in Detroit. Detroit police say the former congressman died at his home on Sunday, Oct. 27, 2019. He was 90. ((AP Photo/Carlos Osorio, File)

Conyers climbed onto a flatbed truck and appealed to black residents to return to their homes, but he was shouted down. His district office was gutted by fire the next day. But the plight of the nation's inner cities would remain his cause.

"In Detroit you've got high unemployment, a poverty rate of at least 30 percent, schools not in great shape, high illiteracy, poor families not safe from crime, without health insurance, problems with housing," he told The Associated Press in 2004. "You can't fix one problem by itself — they're all connected."

He was fiercely opposed to Detroit's finances being taken over by a state-appointed emergency manager as the city declared bankruptcy in 2013. Conyers, whose district included much of Detroit, sought a federal investigation and congressional hearings, arguing it was "difficult to identify a single instance" where such an arrangement, where local officials are stripped of most of their power, succeeds.

Conyers was the only House Judiciary Committee member to have sat in on two impeachment hearings: He supported a 1972 resolution recommending President Richard Nixon's impeachment for his conduct of the Vietnam War, but when the House clashed in 1998 over articles of impeachment against President Bill Clinton, Conyers said: "Impeachment was designed to rid this nation of traitors and tyrants, not attempts to cover up an extramarital affair."

Conyers also had scandals of his own.

In 2009, his wife Monica Conyers, a Detroit city councilwoman largely elected on the strength of her husband's last name, pleaded guilty to bribery. The case was related to a sludge hauling contract voted on by the City Council, and she spent nearly two years in prison.

Three years earlier, the House ethics committee closed a three-year investigation of allegations that Conyers' staff worked on political campaigns and was ordered to baby-sit for his two children and run his personal errands. He admitted to a "lack of clarity" with staffers and promised changes.

But he couldn't survive the last scandal. An ethics committee launched a review after a former longtime staffer said Conyers' office paid her more than $27,000 under a confidentiality agreement to settle a complaint in 2015. She alleged she was fired because she rejected his sexual advances, and other said they'd witnesses inappropriate behavior.

Conyers initially said he looked forward vindicating himself and his family, but he announced his immediate retirement in December 2017 after fellow Democrats called for his resignation. The chorus included Minority Leader Nancy Pelosi, the House's top Democrat.

Conyers became chairman of the House Judiciary Committee when Democrats regained the House majority in 2006. He oversaw 2007 hearings into the White House's role in the firings of eight federal prosecutors and 2009 hearings on how the NFL dealt with head injuries to players.

Conyers frequently swam against the prevailing political currents during his time in Congress. He backed, for example, anti-terrorism legislation that was far less sweeping than a plan pushed by then-Attorney General John Ashcroft in the wake of the Sept. 11 terrorist attacks.

He was also an early supporter in 2007 of then-Sen. Barack Obama, who was expected by some in the Congressional Black Caucus to push public health insurance, sharp funding increases for urban development and other initiatives long blocked by Republicans.

Conyers enjoyed his greatest support back home in Detroit — except when he tried to venture into local politics. Conyers took on 16-year incumbent Mayor Coleman A. Young in 1989, launching his bid with the statement: "Look out, Big Daddy, I'm home." But a poorly organized campaign helped him finish a mere third in the primary. He ran again for mayor when Young retired in 1993, and lost again.

Along with his wife, Conyers is survived by two sons, John III and Carl.

Fox News' Chad Pergram and The Associated Press contributed to this report.