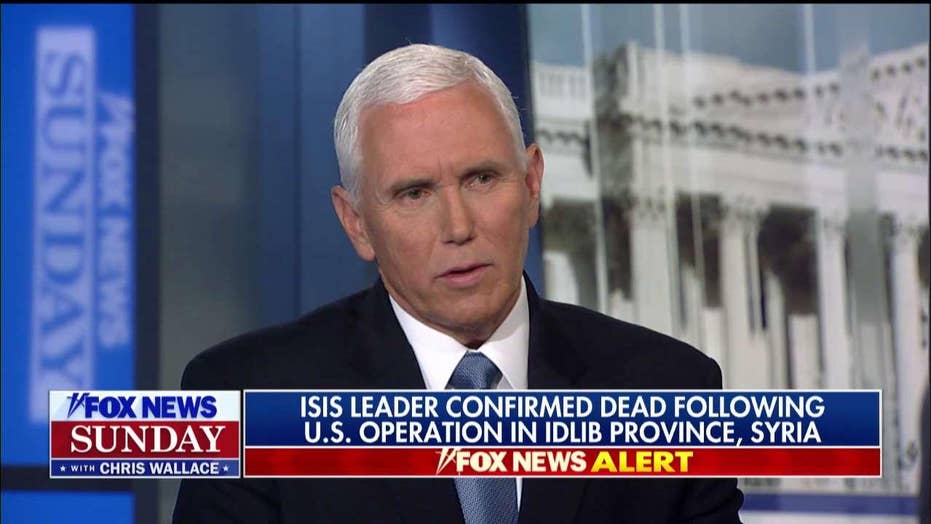 America 'woke up to learn' that the U.S. will destroy any terror group that threatens it, said Vice President Pence

The United States woke up on Sunday to learn its government will stop at nothing to destroy any terrorist group that threatens American interests or intends to do its citizens harm, Vice President Mike Pence said on "Fox News Sunday" this week.

Pence said despite President Trump's decision to withdraw troops from northwestern Syria, his resolve to eliminate the Islamic State terror network has never been stronger.

"What President Trump demonstrated here is, even while we're bringing our troops home from the safe zone on the border of Turkey -- that this president and America’s resolve to defeat ISIS and to hunt down and destroy any terrorist organization in the world, is unrelenting, and that’s what the world woke up to learn this morning," he said.

Pence also described what it felt like watching the operation being carried out from the Situation Room and praised the precision and professionalism of the troops who were involved.

"We had eyes on what was happening in real-time," he said. "And, the president in the Situation Room was able, in addition to reports coming in from the field, to know exactly what was taking place."

"It was truly extraordinary," Pence continued. "Again, to literally witness in real-time our special forces -- their professionalism, the swift manner in which they got on the target, executed the operation, and moved out in just a matter of a few short hours -- it was deeply inspiring."