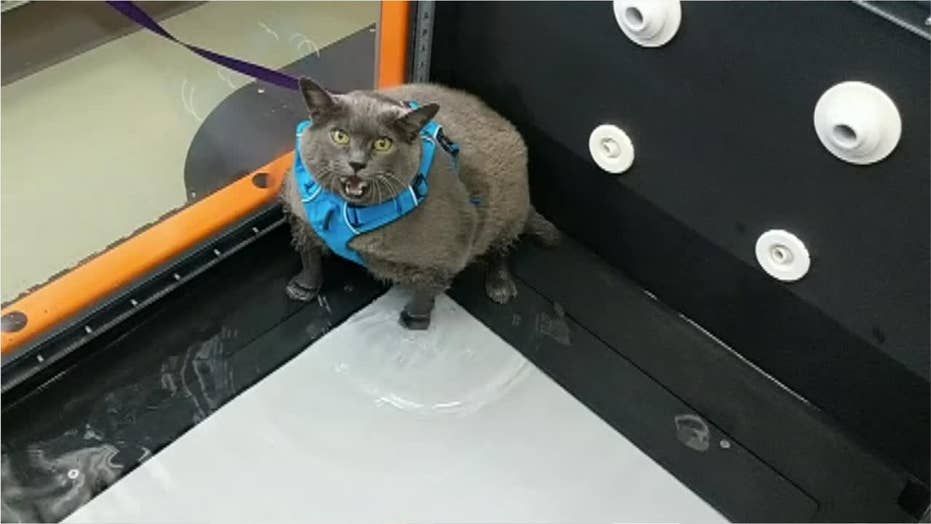 An obese cat is embracing his workout in a new viral video.

Watch out, fitness influencers – there’s a new star on the rise. Cinder, the morbidly obese cat, and her journey to a healthier lifestyle has captured hearts all over the internet as she works to slims down – one underwater treadmill workout at time.

In recent days, the story of the finicky feline from Bellingham, Wash., went viral when she was relinquished to the Northshore Veterinary Hospital by her owner. The reasons behind the surrender were not reported.

After the plump pet was turned over, the vet has created a workout plan to help the cute cat, nicknamed “Cinderblock,” lose weight in a ploy that has since gone far and wide.

Video footage of the harness-clad gray cat half-heartedly pawing at an underwater treadmill, seeming to protest her specialized exercise, has since received over 4.5 million views on Twitter to date.

In the 12-second clip, Cinder is heard meowing loudly as the person filming tells her, “That’s a good girl.”

In an uplifting update shared to Twitter on Friday, the social media-famous cat had apparently warmed up to her workout routine.

As seen in a seven-second clip, Cinder purposefully strode through a deeper pool of water on the treadmill. With a little help from a handler, the cat meowed and trudged forward, in footage that has since been viewed over 116,000 times as of Saturday morning.

Commenters were largely delighted to see the cat’s paweseome progress, and wished her well.

“Man I can relate cinder,” one user said

“I'm going to join inn protesting while working out, Cinders my spirit animal,” another joked.

“Always makes me so happy seeing overweight animals get fitter and healthier. You can do it Cinderblock!!!” one cried.