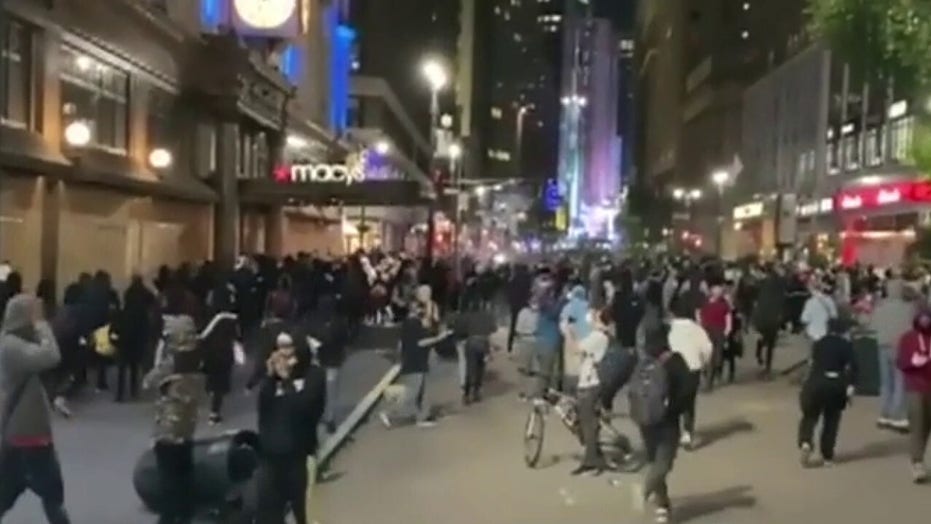 Demonstrators protesting the death of George Floyd remained on the streets of New York City after an 8 p.m. curfew took effect; Aishah Hasnie has the latest.

Fast-fashion retailer H&M has temporarily shuttered 95 of its U.S. stores as activists across the country continue protesting the death of George Floyd.

A spokesperson for the Swedish clothing store confirmed on Tuesday that 95 shops have been “temporarily” closed “due to the protests,” Reuters reports.

In an open letter, H&M Group CEO Helena Helmersson voiced the company's support for the black community and said that H&M would be donating $500,000 to the NAACP Legal Defense and Education Fund, civil rights advocacy group Color of Change and the ACLU.

H&amp;M operates over 5,000 stores worldwide, with nearly 600 of those locations in the U.S. (iStock)

“We stand with and support the Black Community – today, every day and everywhere to end racism in all forms,” the letter said. “The recent killings of Ahmaud Arbery, Tony McDade, Breonna Taylor, George Floyd, and more members of the Black Community in the U.S. leave us devastated and heartbroken. Their lives, and the lives of all black people taken by violence, mattered.”

“We also acknowledge our past mistakes and they have made us acutely aware of how much we still need to learn. As a company, we are growing, but we can and must do better,” the message continued. “We re-commit to taking tangible steps to challenge racism and support our colleagues, customers and communities. Symbolic support is not enough – we will take action.”

H&M operates over 5,000 stores worldwide, with nearly 600 of those locations in the U.S.

The retailer follows Target, Walmart, Nike and Adidas in temporarily closing stores amid the ongoing protests, which have occasionally turned violent.

On Memorial Day, Floyd, 46, died after he was pinned to the pavement by a white police officer in Minneapolis, who put his knee on the handcuffed black man’s neck while he continually stated he could not breathe. His death has since sparked outrage across America.