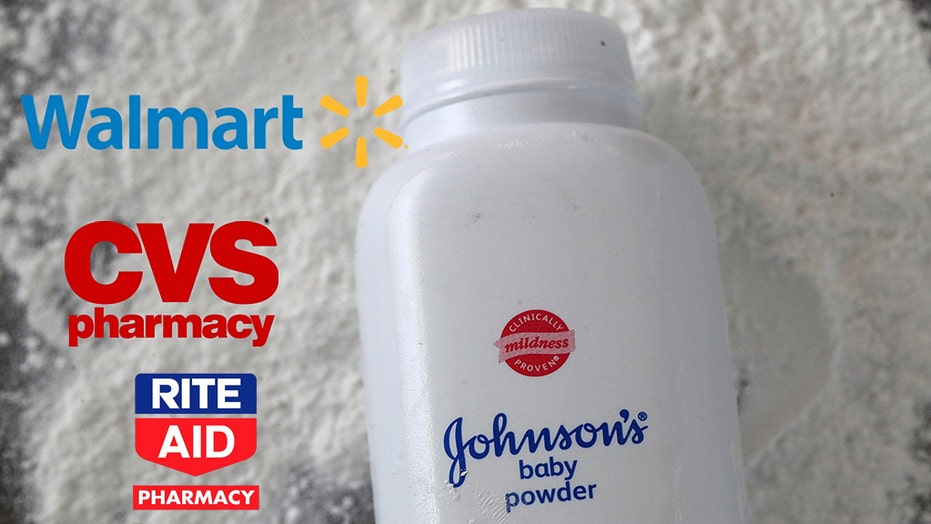 CVS, Walmart, and Rite Aid are pulling all 22-ounce bottles of Johnson & Johnson baby powder from their stores due to fears of asbestos contamination.

The decision occurs roughly a week after the company recalled 33,000 bottles, following the discovery of trace amounts of asbestos in one lot of the product shipped in the United States in 2018.

A CVS spokesman told Fox News via email on Friday that the store was removing the bottles from their shelves after initiating a 'Do Not Sell' register prompt in to prevent the product from being sold.

"We are complying with Johnson & Johnson’s voluntary recall of Johnson’s Baby Powder 22 oz. and have removed this product from all stores and from http://CVS.com," Michael DeAngelis, senior director of corporate communications, said in an email to Fox News. "We also initiated a “Do Not Sell” register prompt in our stores to prevent the sale of this item during the product removal process."

J&J spokesman Ernie Knewitz told Reuters the CVS move was temporary and the company was "doing it storewide" because they didn't have the resources to check all the numbers at the store level.

CAN YOU ACTUALLY BE 'SCARED TO DEATH'? THE FRIGHTENING WAYS FEAR CAN IMPACT YOUR BODY

Johnson &amp; Johnson announced a voluntary recall of 33,000 bottles of baby powder after federal regulators found trace amounts of asbestos in a single lot of the product. (Photo Illustration by Justin Sullivan/Getty Images)

Rite Aid told its stores to remove all 22-ounce bottles of J&J baby powder on Oct. 18 and transport them to a secure location, company spokesman, Chris Saversese, told Reuters.

“Additionally, we’ve applied a point of sale system block for this product to prevent it from being sold," he added.

CNBC reported late on Thursday that Walmart, the world's largest retailer, also removed and blocked all of the recalled baby powder from their stores.

Johnson & Johnson issued a recall of 33,000 bottles of 22-ounce baby powder on Oct. 18 after the U.S. Food and Drug Administration found trace amounts of asbestos in a single bottle purchased through an unnamed retailer. It was the first instance officials detected traces of asbestos in J&J's product, according to Fox Business.

"Out of an abundance of caution, Johnson & Johnson Consumer Inc. announced that it is initiating a voluntary recall in the United States of a single lot of its Johnson’s Baby Powder in response to a U.S. Food and Drug Administration (FDA) test indicating the presence of sub-trace levels of chrysotile asbestos contamination (no greater than 0.00002%) in samples from a single bottle purchased from an online retailer," the company said in a Oct. 18 statement.

Johnson & Johnson has denied the product was dangerous and all of their other Johnson's Baby Powder products will remain on the shelves. The company is facing thousands of pending lawsuits regarding the issue that talc powders cause cancer.

In June, Johnson & Johnson was ordered to pay 10 million to a woman who said the baby powder linked to her cancer diagnosis.

"We will pursue an appeal because Johnson’s Baby Powder does not contain asbestos or cause cancer, as supported by decades of independent clinical evidence," J&J said in a statement at the time.

The CEO of Johnson & Johnson, Alex Gorsky, testified earlier this month that the baby powder brand was safe and free of asbestos, according to Fox Business.

“We unequivocally believe that our talc and our baby powder does not contain asbestos," he said at the time, before the FDA report.

Reuters reported last year that company records, trial testimony and other evidence from 1971 to the early 2000s suggested the company did, in fact, know its raw talc and finished powders sometimes tested positive for small amounts of asbestos.

Johnson & Johnson has repeated that its talc products are safe, adding that decades of studies have shown them to be asbestos-free, according to the outlet.

Asbestos is a known carcinogen that's linked to deadly mesothelioma, a tumor of the tissue that lines the lungs, stomach, heart or other organs.