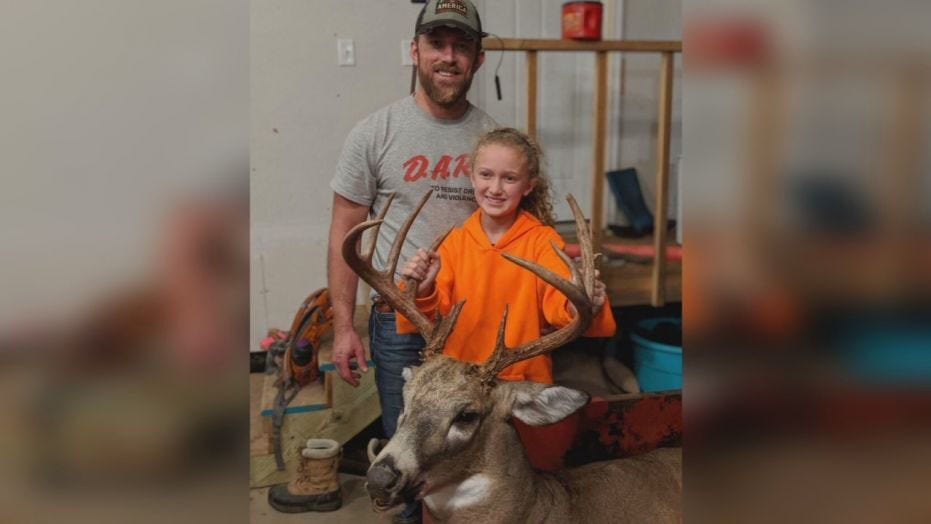 Watch out, deer: There’s a new hunter in town and, and despite being a pre-teen, she’s a heck of a shot.

The 11-year-old girl in Minnesota surprised even her father when she bagged an impressive 12-point buck last week. Making the feat even more impressive, it was the young girl’s first time shooting on a hunt.

“They can’t really believe it, they just kind of sit and laugh when I show them the picture,” Lilly's father, Luke Mickelson, told Fox 9 about how his friends react to the story. (Amanda Mickelson)

Lilly Mickelson took the buck down around dinner time on Friday night, Fox 9 reports. She was out on a hunting trip with father, Luke, and the pair reportedly waited two hours before spotting the animal.

“It was my first deer and my first time going out hunting with me shooting. So, I was just nervous that I’d miss or something,” Lilly told Fox 9.

“He didn’t see [the deer] at first, so I had to point it out to him,” Lilly explained of spotting the buck. “We were both shocked, and we were trying to get a good aim.”

Lilly fired on the buck and magaged to hit it "in the back," she said, explaining that she had to approach the buck and "shoot it a couple of times before it died completely."

“It was my first deer and my first time going out hunting with me shooting," Lilly said (Amanda Mickelson)

Meanwhile, Luke told the news outlet he was "still in shock" over his daughter's achievement, adding that he "couldn't have been any more proud."

He also claims that when he tells his friends about his daughter’s accomplishment, they don't believe him — which is why he keeps photographic evidence.

Fortunately, it seems that Lilly isn’t letting her dad’s bragging give her a big ego. “I just kind of laugh and say well, I just got lucky,” she told Fox 9.