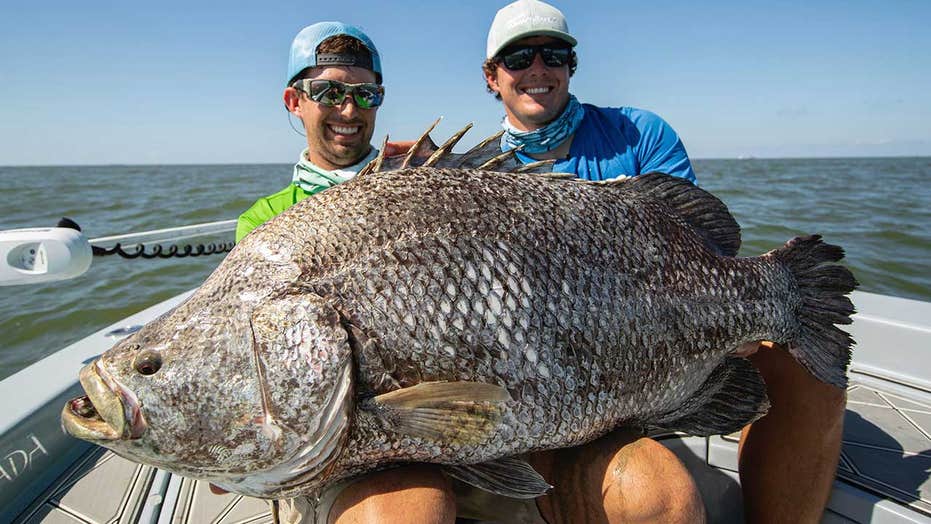 “I was completely shocked,” says Joshua Jorgensen of the massive Atlantic tripletail he reeled in on Oct 9. “I knew they could get that big, but I never thought in a million years I would catch one like that.”

Jorgensen, the creator of the online fishing series BlackTipH, had flown out to Louisiana from his home in Florida to meet up with his buddy Blake Rigby, for a few days of fishing for tuna and tripletail. But he didn’t catch any tuna, and instead ended up with a mammoth tripletail.

“It didn’t even fight. Swam straight to the boat and right into the net,” Jorgensen tells Fox News. (BlackTipH/Joshua Jorgensen)

That day, Jorgensen and Rigby -- who runs Tripletail Charters -- set out from Venice, La., for a friendly fishing competition. As seen in a YouTube video documenting the trip, the two had some pretty good luck right off the bat. But four hours in, Jorgensen hooked “the biggest one I’ve ever seen.”

“It didn’t even fight. Swam straight to the boat and right into the net,” Jorgensen tells Fox News.

Both Jorgensen and Rigby knew he'd caught something special, as evidenced by their reaction once the fish was safely in the boat.

“What is that?!?” yelled Jorgensen, who could be heard screaming with excitement in the footage.

A 40-pound tripletail would have been big enough to clinch the Louisiana record, set by a 39.5-pound fish caught in 1959. But unfortunately for Jorgensen and Rigby, they still had to get it back to the Cypress Cove Marina for weighing.

“Neither of us had dealt with a record fish like that before,” Jorgensen admits. “We would’ve beaten that record, I’m sure of it.”

According to Jorgensen, however, the two waited a bit too long to plop the fish into a tub filled with fresh water — meaning they made a few mistakes that would lead to the fish losing a bit of weight on the journey home. For starters, Jorgensen says the two should have packed the fish in ice and saltwater — and immediately — to keep it from dehydrating.

Once the two reached the marina an hour later, the fish weighed 39 pounds, 5 ounces. And later, when they re-weighed it just to check the scales, it weighed even less.

“He probably lost over a pound [on the way back],” Jorgensen says, claiming the fish lost a bit of blood, saltwater and wastewater during the journey.

“It sucks that I had to learn this way. I wish I would have known," he says.

Even still, Jorgensen ended up nabbing what's likely the fourth-largest tripletail ever recorded — and the second-largest in Louisiana history, according to state records and a Louisiana state biologist who weighed the fish on the scene.

As for the current location of the fish, Jorgensen said he’s got it safely stashed in his freezer.

Tripletail, a warm-water species named for its three rounded fins, can grow to over 40 pounds, according to the Gulf Coast Research Laboratory at the University of Southern Mississippi, although specimens weighing between 2 and 16 pounds are more "typically" encountered by anglers.

For comparison, an 11-pound tripletail caught over the weekend in Maryland just set the state's record, USA Today reported. The largest in the world, however, was caught in South Africa and weighed 45 pounds, 5 ounces.