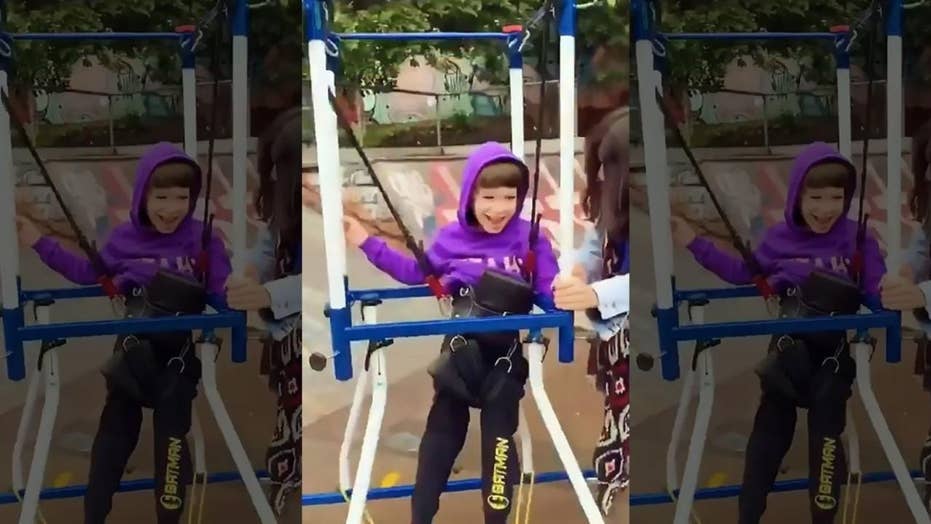 Five feel-good stories from the week of Oct. 19- Oct 25. Check out what’s clicking on Foxnews.com.

Here are some good stories of inspiration, faith, patriotism and giving back that we could all use this week.

Joao, 7, fulfills his dream of playing on a skateboard.

A 7-year-old Brazilian boy with cerebral palsy recently showed off some gnarly moves at his local skate park, thanks in part to a group that helps kids with disabilities learn how to skateboard.

Joao Vicente, who suffered a stroke at 20 months old, was strapped into a frame on top of a modified skateboard that was then pushed around by his mom, Laura Costa Patron.

“My son is a kid full of kindness, wishes and dreams and one of them, for a long time, has been to go skateboarding,” she said, according to CEN. “For kids with cerebral palsy or any kind of disability, having dreams and wishes is not allowed. The world is always saying no.”

When Tyler Moon, 25, of Minneapolis, Minn., chose to add the words "Jesus Saves" on his race bib, he didn't realize the impact it would have on his life and others. He just wanted to share his faith.

Eight miles into his 10-mile race, he collapsed from cardiac arrest and a nurse named Jesus "Jesse" Bueno, who was only steps behind him, stopped and gave him life-saving medical attention, along with other medical professionals, until paramedics arrived.

Moon's heart is fine, thankfully, as he is set to marry his fiance, Amy Greene, in January.

“Thank you to everyone who helped me and thanks to all the runners who stopped and saved my life," Moon told Fox News. "I believe God placed all those people there at the right time and the right place for His glory.”

A FedEx delivery who flipped a set of stars and stripes pillows on an Ohio front porch is being hailed a patriot after footage of the kind act went viral.

The unidentified package deliverer swapped the pillows Wednesday when he noticed they were out of order — the stripes pillow was to the left of the stars when it should have been reversed.

Jackie Szabo, who called the gesture "sweet" and "extra special" as her son is an "Airborne Soldier and veteran in U.S. Army, told Fox 35 she saw the man fixing her pillows on the security camera: "When the FedEx guy puts the stars before the stripes."

New Orleans Saints linebacker Demario Davis' has raised $120,000 and counting for a local Mississippi hospital through the sale of his "Man of God" headband that earned him a fine from the NFL back in September.

"This is amazing, it just shows you the power of God," said Davis on the latest episode of Fox Nation's "Laura and Raymond." "You know, I would have never thought this whole movement would have happened — and it's not just here in New Orleans. It's been national."

Davis said he chose to glorify God at the cost of a fine, which was ultimately dropped.

Police officer pleas with distraught dad: 'Your son needs you'

Georgia police officers save a man from killing himself in his kitchen. (Henry County Police Department)

A Georgia police officer called to a home earlier this summer was able to convince a suicidal father to drop the knife he intended to use to end his life, dramatic footage shows.

"Drop the knife," said the officer, who authorities said recognized the man from a previous interaction, said. "Do you want to see your son? Right now your life's really hard. It can get better and it will, but you can't give up."

As soon as he put the knife down the officers rushed to him and transported him to a medical treatment facility. "You're not under arrest," the officer concluded. "You did the right thing today, OK?"

If you or someone you know is having thoughts of suicide, please contact the National Suicide Prevention Lifeline at 1-800-273-TALK (8255).